4 week check up with the doc....
He said I get to take the stabilizer/brace off while at home and don't have to wear for sleeping, just have to pad my shoulder while sleeping. YAY!!! I was so sick of that damn thing while sleeping. So last night was first night without it....good sleep. I'm a happy camper man.
Yesterday morning was my first session back with my trainer. We, of course, did legs. Was a really good session with her.

Disturbing news....
When the dude come and delivered the CPM machine/shoulder chair, he told me about it, and I was needing to hop on a conference call....so i sort of rushed him, he had told me verbally to increase the abduction and external rotation once a week. When I went to doc office yesterday, he asked me where I was at, and I told him proudly that i was at 65 degrees and due to raise it once more yesterday. He said I should be increasing the degrees daily, as can tolerate. I told him, that was not what I was told. Well, i went a looked at my paperwork that he left me, no where on there was it marked daily and all he did was verbally tell me. Now, it could be that i misinterpreted.....but still. They failed epically. So i'm trying to make up. Jeez.

Questions I had for the doc at this appointment:

-if we had a camera looking inside my shoulder, what would the story tell?
Doc response: he said he doesn't know, never had this done before. He guessed that the repair to bone spur, stuff might be red in there.

-Bruising front chest and delt. There is some bruising that developed this past week on front chest, front of delt.
Doc response: yes, this is normal.

-Cryotherapy ok to? We have a local place that you can climb into the vat, and get some cryotherapy done. Going to try it out this week.
Doc response: yes ok to do.

-What is/when is it successful? I asked doc, when will we know this was a successful surgery?
Doc response: Won't know until 4-6 mos.

-When does the tendon's start to reattach to the bone?
Doc response: not until 8-10 weeks.

-Working out. Can I?
Doc response: no jogging.

-Will I get another sling to use?
Doc response: no. unless i want to buy one at walgreens or something.

-As we progress, what things should I be on lookout for? Warning signs?
Doc response: he said any decrease in progression, range of motion not as it was, etc. Extreme pain.

-Massages, can i get one?
Doc response: no, not right now.

I see the doc in another 4 weeks. Perhaps after that, I'll start PT. Not sure.

now my sports docs are awesome and if ur blunt and up front with them they will help and offer what they can
and the sex cahir may help more then that crazy chair u got there ….esp in the cardio area
but what u need is to be spoiled and serviced lol

@ITAWOLF bwahaha on the sex chair. But you do have a valid point about cardio....hmmmm.......
Yes, I do need to be spoiled and serviced : )

See ya Friday night for cardio

ITAWOLF said:
See ya Friday night for cardio
Click to expand...
It's a date! Shall I wear the wonder woman outfit again or do you want me to be cat woman this time? bwhaha

BovaJP said:
It's a date! Shall I wear the wonder woman outfit again or do you want me to be cat woman this time? bwhaha
Click to expand...
oh Wonder Woman always !!! cant beat the lasso!!!!!

Alright, alright, alright......
Last week started PT! 2 sessions down last week, 2 this week and 2 for the next several weeks. Also, my homework too lol. The shoulder feels tight, hurts and weak...I can't yet raise my arm not even to my shoulder level just yet LOL, that is how weak it is. But I haven't been using it for 9 weeks lol. I can still feel a tricep muscle in there, but most has atrophied. OH well, it'll bounce back and i'm looking forward to that. But until then, i'm concentrating one day at a time.
Fri night, after my 2nd PT session, they put ice on shoulder and some electrode thingy. Felt weird, that was the first time i've done electric something.
The chair is now gone, don't have to do that anymore. I can finally get back to the gym to do some light cardio.

ssshhhhhh stop telling all my secrets!!! I think u did awesome last week and last night lol

now the key is to slowly move back into it ...stretch is good ….but try to go 1/4 inch more every day or so
thou ice seems to do wonders ---heat will make you feel better esp after some biofreeze

wow its been almost a mth --time is flying

wish u best my dear

Had my 4th PT session this morning. Whew it was a doozer lol. My personal trainer put me through a grueling leg workout yesterday at 5am. This morning's PT session now overshadows the tortured wheels.

Shoulder is sore....but I am making slow progress, and that is great. Slow and steady wins this race. I was given a yellow band to take home to slowly ease into that. Just two exercises with the bands and I have some other exercises with a light bar.
I can only raise my right arm on its own up to about shoulder height. That is how weak it is. So crazy.

Sounds like you are making progress in range of motion, sex chair is doing you good 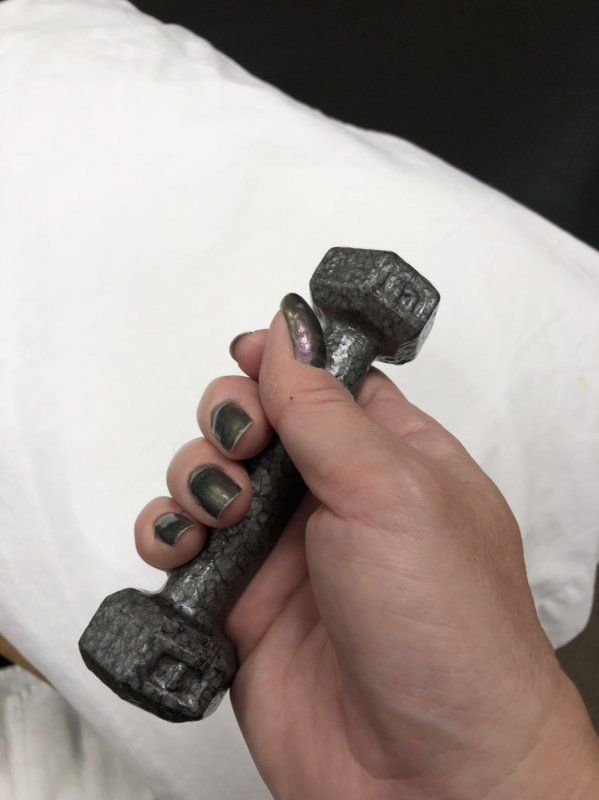 My hubs said to be careful i dont break a nail

My hubs said to be careful i dont break a nail