The President walked from the White House to St John's Church through Lafeyette Square. My gf said "I don't see how it can be safe for him to do that, with all the protesters and such". I was like "oh, its safe, trust me". Being at several presidential rallies in my lifetime I know an veritable army of secret service surrounds him, and if its a situation like this the numbers are probably doubled.

And then a picture gets posted. Secret Service Uniformed Division. Getting set for the President's stroll. 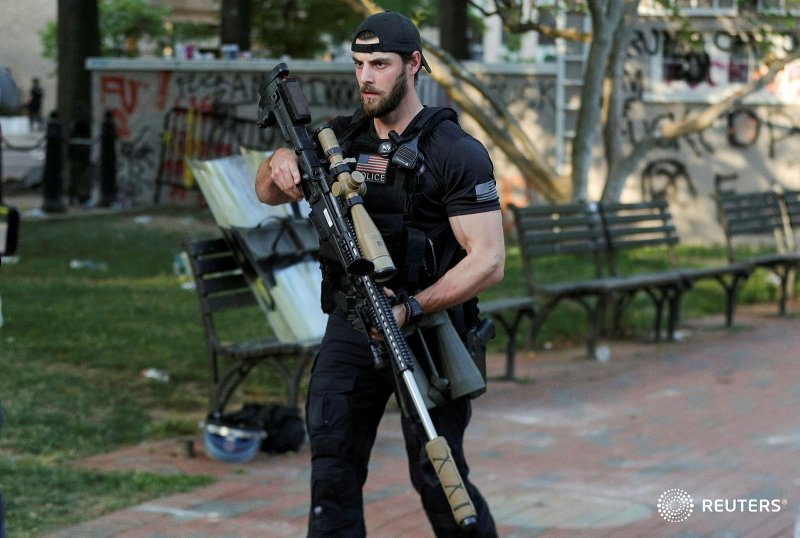 On our way to a diner one morning we noticed a gun ship flying low, off ramps blocked and increasing LE enforcement as we neared the diner. SS was everywhere around and inside the diner. About 25 local LE vehicles converged, TRUMP 2020 tour bus pulled up and about 25 more LE vehicle filled in and surrounded the bus from the rear. It was Pence.

Some were city, some where county and then state troopers. Then there were regular MI looking folks with light arms peppered among them.

Good article on this photo op.

I had some questions about why they were on the ground and not set up, high, way in advance. Either way, more pics and some details on the weapon.

Any idea how heavy or light this gun is? Looks heavy

I had some questions about why they were on the ground and not set up, high, way in advance. Either way, more pics and some details on the weapon.

FlyingDragon said:
Any idea how heavy or light this gun is? Looks heavy
Click to expand...
It does look heavy for sure, but since it’s so customizable and price was of zero concern to him, who the hell knows. I’d go with upwards of 25-30lbs.

This weapon weights about 30lbs less the scope and loaded magazine.

Bigtex said:
This weapon weights about 30lbs less the scope and loaded magazine.
Click to expand...
No its much lighter than that.
Its either a 300 WM or 7mm.
I have a .308 in a chassis and its around 11lbs.
Mine is a short action and thats a long action but the weight isnt that drastically different.
That one runs a Harris bipod and its not very heavy. I run an Atlas on mine, doesnt not weigh much.
Neither does the suppressor. I have a few of those. The Saker is heavier than the Omega 300 but not that much.
I read somewhere that its either a McMillian or Accurcy International chassis with a Remington 700 style action.

Check out the new Barrett MRAD MK22 system they developed for Spec Ops.
Its bad ass. The rifle outfitted with the .338 LM 26" barrel weighs 14.5lbs, that should be a comparison.
https://barrett.net/products/firearms/mrad
You must log in or register to reply here.
Share: Facebook Twitter Google+ Reddit Pinterest Tumblr WhatsApp Email Link
Top