https://www.adidas.com/us/power-perfect-3-shoes/BD7158.html The white ones are marked down 20%

Add coupon code ADDIMOON, for another 30% off. GREAT deal on these shoes! 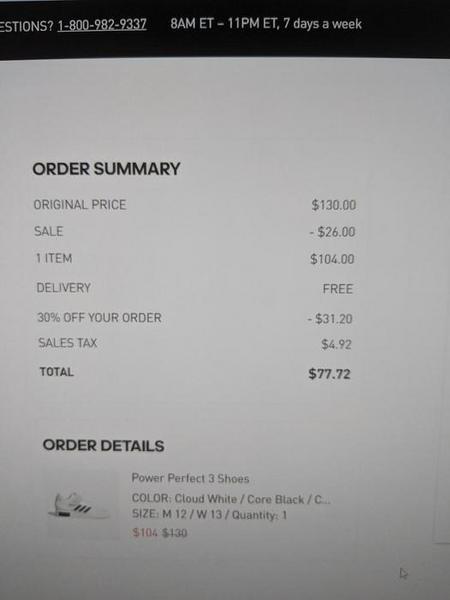 There is a story behind me being on the lookout for a deal.
Met a new guy at my gym about a month ago. Younger dude. I think he is 24. 6'2 ish a solid 275 and ALL of his weight is in his quads and hamstrings


He saw me doing some no handed squats and we struck up a conversation. He is a younger black dude, and had a rough start in life. I could see a lot of the tats he had, and he explained that at one point he was going down the wrong path. He almost got a ride for Football, but his grades were not good enough so they never committed to him. (he almost didnt graduate HS). He works full time for a warehouse and is trying to go to school.

I was and am flattered by his seeking of advice from me. I guess I kinda remember when I was younger how I looked up to some of the older guys. I now realize I am just about twice his age and now is my turn to help "pay back". Strong kid. He reps 495 like I rep 405. He makes it look WAYYY to easy. But the kid is a sponge for advice and we have started to work on his bench as well.


One of the first things I told him was he had to ditch his regular sneakers. He is squatting WAY too much weight. It is almost silly to see the soles of regular shoes with almost 800lbs on them. (his bodyweight plus the bar). I know money is tight for him. I told him I would watch out for a good deal on Adidas Power Perfect. They normally run about $130. Tonight I got a sale alert and they were 20% off. I also had a 30% off coupon code on top of that, so I could get them for basically 1/2 off.

I texted him the deal and he was super thankful, but said he could not swing it as he just had to pay rent and does not get paid for another 2 weeks. At that moment I realized I have forgotten what it is like to be young and just starting out. I asked him his size and I just ordered him a pair. I told him not to worry about it. He said he will pay me back, but I told him it was not a big deal. But if he feels he needs to, just dont leave himself short and whenever is fine. It just felt like the right thing to do.

Funny, this "kid" towers over me. But I feel like he is such a small kid. He just has that great outlook on life that comes with being young.
R

They don't all have that great outlook on life, but it sounds like you found a jewel worth polishing. Some things one can do with money are stupid, or wasteful, or downright obnoxious ... you chose a great thing to do with money. I have a hunch this guy will pay you back in time, probably with the money, but especially with the things money can't buy.

Or tell him to pay it forward someday.

What a fab story mac! Thanks for sharing....paying it forward is good for the soul. Sounds like you listened to your "heart" on this one. Good for you.

Code not working anymore. But thanks for sharing.

Got the guy his shoes on Friday. He asked if we could catch a leg day together next week. I told him I might not keep up with him. (coming off a spinal fracture and 3 disk injuries from a car accident just over a year ago). I have only gone 'heavy' a few times just as a gut check. Not sure I am ready to push it, but maybe this will get me off my a$$ a little.

Being a smaller guy, 5'9 200ish, I always liked working out with bigger dudes and up until a few years back, I could often out lift them (or keep right up with them). I dont think it is that age so much as the recent injuries that have messed me up a touch.

I think I still have a mid 5 squat in me, but my back has to be in a happy place for me to go up over 405. Maybe the motivation of working out with a guy half my age and who has about 75lbs on me will do me some good! (not going to do anything stupid though for sure).

Just happy to help a brother out. I am excited as hell to see how he likes them when he gets a bar on his shoulders. I remember the first time I squatted in mine and how much confidence they gave me in how well my feet felt planted.
Who is viewing this thread?