What do we do?

DungeonDweller said:
Why there’s talk about China starting a war with Taiwan

Some countries are growing, and noticing our apparent weakness. Nothing units the US better than a popular war.
Click to expand...

I'm surprised China hasn't already had a hissy?....Supposedly, according to that article there are 3 RED LINES that Taiwan would have to cross in order for China to go ape wall (hostile action by force)?...The 3rd one has been BROKE MAJORILY!?....I'm wondering why China hasn't already reacted?...

BTW, what does the U.S.A. need/want from Taiwan to even be concerned for their (Taiwan) take-over by China?...


"The third is if Beijing were to believe an outside power was getting too cozy with Taiwan. Yes, the US sells Taiwan billions in weapons — fighter jets, rocket launchers, artillery — and holds military exercises with Taiwanese forces".......

BackAtIt said:
U guys know I'm politically neutral, so my hope lies within what the scripts teach on it...

However, I'm a father of 3 beautiful young women and a grandfather of 2 (2yr and recently 2week old girls)...Education is the KEY!...I just received an email from my oldest yesterday, THANKING me for teaching her right and even admitted I was the ONLY one to do so!...Made my day to say the least!!!!...
Click to expand...

There is a lot of truth to this. Teach your kids. Don't rely on the school system to do so. If you do, you just played right into this crap we are dealing with.

BackAtIt said:
BTW, what does the U.S.A. need/want from Taiwan to even be concerned for their (Taiwan) take-over by China?...
Click to expand... 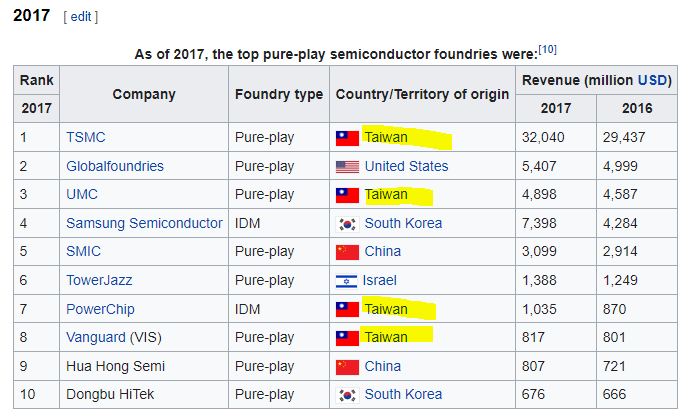 From wikipedia, newest data they have posted is 2017. But as you see TSMC is 6x larger than the #2 producer and Taiwan in total produces most of the worlds semiconductors.

On the semiconductor shortage:

DungeonDweller said:
Why there’s talk about China starting a war with Taiwan
Why the US Navy sails past disputed artificial islands claimed by China
Russian Forces Near Ukraine Are Still a Threat, U.S. Says
Some countries are growing, and noticing our apparent weakness. Nothing units the US better than a popular war.
Click to expand...

This administration is painfully pro China so this old brain dead POS would definitely just stand by while that small nation gets destroyed and it’s people get slaughtered. Sad but true. Idk if anyone’s noticed but we have installed the weakest and most pro socialist administration ever so you bet your ass they would side with China. And war doesn’t unite a nation, unless it’s a war with a purpose and we haven’t had one of those since the great world war.

Well, yes. China cracks down on Hong Kong which they say is autonomous and run labor concentration/death camps of Uyghurs making products for the US and Biden does nothing...

But if semiconductor manufacturing is at risk he may be forced into action by the Fortune 500 companies. Covid pandemic already caused a hiccup in production which is felt by every manufacturing sector. Remember even Roosevelt had somewhat of an admiration for Hitler (brothers in progressivism), but was forced into war with him (well, Germany declared war first which is considered a blunder).

We have stood next to and supported Taiwan for well over 50 years. It's a thriving democracy. It's a quandary for China, as their treatment of Hong Kong is showing the world their true colors. Domestically, China has to make noise that they will never let go of Taiwan, but internationally, China does rely on trade to keep their economy from imploding.

Trump showed the world that you can stand up to China economically, as China blinked on the first round of trade talks, and was going to have to blink again on the second round, if Trump hadn't lost the election. It's almost as if China needed some world-wide catastrophe to ruin Trump's chances of being re-elected. Of course, allowing international travel into and out of Wuhan after prohibiting domestic travel is just silly, conspiracy theory talk. LOL

I wish I had the answer. I have a daughter that is 31 and a grandson that is teenager. I've tried to raise my daughter to think for herself and my grandson trying to make him as independent as possible. It makes me sick what America has turned into and how are at each other's throats over things that don't matter. There's a lot of stuff that we need to stand up for and there's way more stuff that people just jump on the bandwagon because they want to be on the winning team even if they don't truly believe what they're supporting. If I had the money I would leave the country because it's going to get progressively worse. Will be worse than a third world country soon enough

It awful that we have to watch with our own eyes how America is being destroyed by our own government.. There used to be a word for this it’s called treason and the punishment is death

I wonder what biden voters are
Thinking everytime they go to the gas station or watch that bumbling idiot embarrass the country with his incredible speech giving skills..

Bro Bundy said:
I wonder what biden voters are
Thinking everytime they go to the gas station or watch that bumbling idiot embarrass the country with his incredible speech giving skills..
Click to expand...

There weren't any biden voters

J/K, I used to blame biden voters at the beginning but since he really didn't win, it's not their fault.

Democrat organizers in a few states, like Georgia, are warning the party that with the new voter laws in place a repeat of 2020 is unlikely in 2024. Take it for what you may.

DungeonDweller said:
Democrat organizers in a few states, like Georgia, are warning the party that with the new voter laws in place a repeat of 2020 is unlikely in 2024. Take it for what you may.
Click to expand...

Their wokeness also lost the state a shit ton of money on the Allstar game. Dumbasses.
Who is viewing this thread?