Lizard King said:
It's nothing fancy:
https://www.titan.fitness/strength/...in-and-pipe-safety-landmine-pivot/400211.html
Click to expand...

Ha! I thought I might be the only one who had one* of those weird looking things. (* "one" actually means 2, included in that ~ $20 price) Titan's intention is that you put one or both on the pin+pipe spotters within your 4-upright cage, and then you can have a single or double landmine set-up anchored at whatever height you set the spotters at.

I only have a 2-upright squat stand, but I found another use for one of the pair included in the $20. My landmine's a "post in" version, I have a parallel handle, but I couldn't find a wider handle as quickly as I wanted. Solution was to slide this gizmo onto the 2" end of the barbell, and slide a 4' section of steel pipe intended for plumbers through the other part for my wide grip @ whatever actual width I want. Might give the unused 2nd gizmo to my wife on Valentines Day, tell her it's modern art, or a planter, or something.

Lizard King said:
I don't get how you would use both at the same time @rawdeal
Click to expand...

Can't remember where, and I've only seen it one or two times (Rogue or Sorinex ... maybe),but I have seen a double landmine for sale online. Not talking about those landmines that accept 1" and 2" barbells, btw. My old gym used to have a lot of Hammer Strength machines that had 2 handles you could either push/pull with 2 hands simultaneously or alternately; they called that "iso-lateral" for those who preferred one way or the other. I'm guessing a double landmine might appeal to the same mindset, and further guessing Titan had this in mind when they decided to sell these as a pair (???) Picture choosing to do db shoulder presses 2 hands simultaneously vs. alternately ... and then translate that to a double landmine using 2 separate landmine pipes accepting 2 barbells that each wind up in your hands.

Most everything that BB and PL do moves weights in a simple, distinct direction, but there is a segment of the sports world that prizes more natural, "athletic" stuff that more closely mimics what they do in their chosen sport. Boxing, wrestling, mma, crossfit, strongman, some weight throwing events in track, even baseball, football, etc? I am happy with my very basic set-up, but I can see where there would be a market for "iso-lateral."

Makes sense now to put one on each side of the cage.

Sweet LK. I'll pass though, I could see myself getting injured and or hurt with that contraption.

Dug up a pic of what I meant by "double landmine," as well as the smaller pics that include a guy using one. This one is rig-mounted the normal way, but what I imagined for jury-rigging your own with that weird Titan thingie was to put both on the same pipe+pin spotter, on the same side of your rack. You would need 2 barbells and 2 separate "single" handles then to get the alternating effect.

May be too "fancy" for too little benefit for 90% of us. Don't think I've ever seen a vid of Ed Coan or Ronnie Coleman using a double landmine, and they seemed to do alright. Note even Rogue doesn't offer a version for their Monster or MonsterLite series ... just for the smaller Infinity series racks. 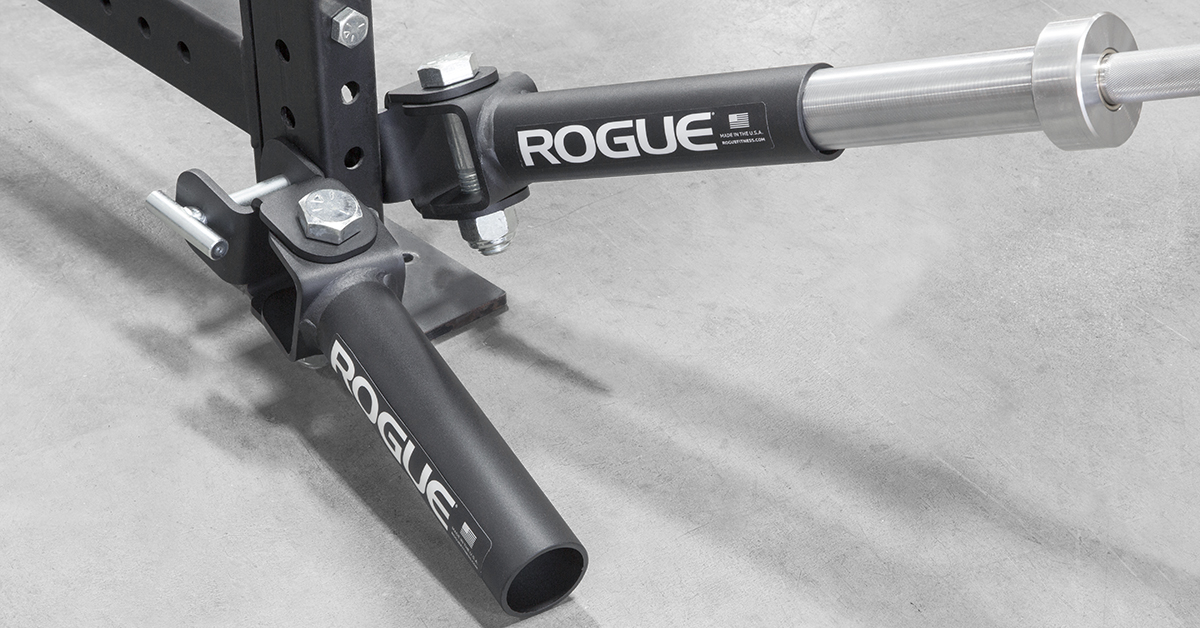 One of the most versatile additions to your Rogue arsenal, the Landmine will help build core rotational stability and peak power through a greater range of motion.

Yes that looks a nice bar for neutral grip presses.....and you could even probably row with it .

Very nice... I have found many uses for mine besides traditional overhead presses... Floor press, deadlift, front squats and core work.
C

might have to add this one to the arsenal!

I’m still wondering why LK hasn’t invited us over to work out?

JackD said:
I’m still wondering why LK hasn’t invited us over to work out?
Click to expand...