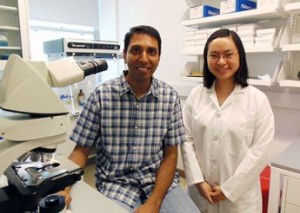 Assistant professor of animal science Vimal Selvaraj inadvertently courted controversy when he published a paper last October refuting long-held beliefs about a protein assumed to be essential to the production of steroids. His research stirred debate among endocrinology researchers and pharmaceutical companies who had spent decades – and millions of dollars – targeting the wrong protein in their quest to create treatments for hormone disorders.

A new paper published in the Journal of Biological Chemistry (June 16) provides further proof that the textbooks are wrong when it comes to the translocator protein (TSPO).

Cholesterol is key in the production of steroid hormones, including testosterone, estrogen and the stress hormone cortisol. To be transformed, it must cross two mitochondrial membranes, and it needs help to do so. TSPO was thought to be the vital transport vehicle.

The bulk of evidence regarding TSPO – documented in a hundreds of research papers – has been generated using cell lines grown in labs rather than in live animals because early experiments (performed by another lab) indicated that mice bred without the protein died as embryos. Selvaraj decided to attempt animal studies anyway, to test TSPO function within a living system.

In his initial experiments, Selvaraj deleted the gene for the TSPO protein in the Leydig cells of mice, which meant it would not be present in their testes, the site of testosterone production. If the accepted theory of TSPO function was true, the hormone levels in the mice would be compromised and they would not produce offspring. But that was not the case.

Scientists questioned whether removing the protein from the testes alone was sufficient evidence to disprove the entire theory. The protein is also present in other locations, including the adrenal gland, which controls many other essential hormonal functions.

Selvaraj’s lab expanded the experiment and removed the gene from the entire animal.

“It was expected that if we removed the gene from the whole animal, it would die,” Selvaraj said. “These mice survived without major phenotypic abnormalities and were able to produce offspring. Steroid hormone synthesis was unaffected in these mice.”

Now that he has removed TSPO from the steroid transport equation, there’s a big vacuum of knowledge, which Selvaraj – and dozens of others – are racing to fill. If TSPO is not the transporter, then what is? And if cholesterol transport is not TSPO’s main function, then what does it do? It is considered a biomarker for many neurological disorders and is present in high amounts in cancer cells.

“In order to develop treatments for diseases like infertility or congenital lipoid adrenal hyperplasia, we need to develop an understanding of what is happening at the cellular level,” said Lan Tu, graduate student in the field of molecular and integrative physiology and first author on the paper.

In June, Tu and Selvaraj presented their research at the annual International Congress of Endocrinology. Selvaraj said it was well received, as it garnered an outstanding abstract award and the presidential poster prize for Tu.