Those who are much passionate about building a strong body take steroids as supplements and face side effects like increment in androgen. So, Nolvadex is used by many as a preventive measure against the unnatural enlargement of male breast and muscles.

The ability of Nolvadex to block effects of estrogen is highly popular with the bodybuilders and especially those who use the anabolic steroids. A number of steroids basically turn into estrogen through the function of enzyme aromatase and so in men this can create imbalance in overall ratio of estrogen to androgens, thereby resulting in some side effects like water retention. This is faced because estrogen promotes release or production of aldosterone, the water retaining hormone from adrenal glands. It can even cause gynecomastia or the enlargement of male breast as well as increase in the level of subcutaneous fat that is stored under the skin which obscures our muscle definition.

Also, Nolvadex shows the potential of increasing the production of FSH or follicle stimulating hormone as well as LH i.e. lutenizing hormone in male body that are both crucial to an enhanced athlete or bodybuilder. This is the outcome of blocking negative feedback inhibition that is caused by the estrogen at pituitary and hypothalamus.

Nolvadex and its effects in bodybuilding 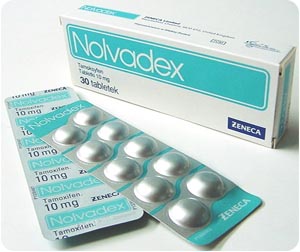 Unlike the other steroids, Nolvadex does not have direct muscle enhancing or fat burning effects on the user’s body. But it contributes largely in keeping estrogen to lowest possible extent because of its anti estrogen results. Nolvadex has further been used successfully as preventive medicine by all those who have high susceptibility for unusual growth of the breasts. Those who have been regular use of the muscle enhancing drugs may have faced huge breasts as a consequence of ill effects by some of these steroids. Nolvadex is thus able to have impact on a person’s overall level of the serum testosterone. This serves to be crucial for the post cycle therapy when the testosterone stimulating effect is useful. The drug can even help to restore the hormonal balance post cycle that is even very vital for the athletes and bodybuilders.

A normal Nolvadex dosage on cycle as the anti estrogen can be between 10 and 30 mg per day. The total amount used will depend on what effects the user would wish to elicit. More dosage will obviously elicit stronger effects but the users should determine the perfect amount they need. They can do so by starting with lower doses and working up their way so that they do not use much than required. For all those steroid users who make use of highly aromatizing substances like testosterone suspension and others or the ones who have sensitivity to estrogen, taking Nolvadex during the cycle will prove to be a great idea for starting early in their cycle.

Though there are a number of benefits of Nolvadex for the bodybuilders, you should take due care about taking the right dosage so that you do not over do the consumption. Always ask your doctor before taking Nolvadex or any other steroid/drug.