HDH said:
IMO, Trump and anyone running a MAGA agenda has to stay away from what is considered conspiracy theories. We are in an information war. We are fighting with dis and misinformation.

If he talks conspiracy, he will be ousted for real. He cannot give them ammo to use against him.

There are no politicians out there saying the jab will kill you.

People are dying. He signed off on this with Fauci/ Birks, funded Bill Gate's Gavi... What you're saying maybe true on how he's supposed to pretend to be. I know you know this wasn't good. Under Trump everything was shut down, unless he was just sitting there like Biden. Then they used the Coof for the mail in ballots.

I knew this could get long so I waited till I had more time.


MR. BMJ said:
I believe republicans received 5 million more votes than democrats this 2022 midterm.......but they lost in key areas. Funny how that happened, in places with controversy and delayed results. It's like they just need more time to 'get more votes in.' On the flip, they picked up some seats in NY of all places, lol.
Click to expand...

Ya, we did win the majority on this one. Arizona says she has whistle blowers and all the info. She says she will be governor.

I don't doubt she has the evidence a bit. My concern is who is in charge of looking at it.

NY surprised me as well.


MR. BMJ said:
I'm going for Trump 2024. Yep big fan here. The republican party would be nowhere without him. If DeSantis were to beat him, and if republicans do not get serious on fixing these battleground states, he will lose. I don't want to hear 1 peep out of anybody if he loses in the same fashion(s) that Trump et al have. Outside of Biden's '81 million votes'
Click to expand...

Not just the republican party, all parties that believe in a constitutional America would be nowhere.

If Hillary got in, the plan would have continued and we still wouldn't know shit. They have been working on this for years, that's why we have been so badly infiltrated by non constitutional POSs turning us communist.

I don't believe trump and DeSantis will run against each other. I believe they are together on this.

What just happened let trump/patriots know who the rest of the non maga supporters were. It's an information war. The first time he learned is when Biden got 81 million. This helped to weed more of them out.

I don't believe trump moved to Florida and hasn't discussed this stuff with a man that follows his agenda to the T.


MR. BMJ said:
Trump has the next highest number at 74 million....but he sucks now lol. He got MORE popular, in 2020, with 12 million more votes than 2016, more hispanic votes than any republican prior, same with African American etc. But he sucks now.
Click to expand...

With all the votes flipped by the machines, he got way more than the 74 it shows.

Nothing has changed about the voters. They still support him. This fake news is a mother fucker. They follow the narrative they are told. Right now the narrative is to show everyone is done with trump.

Their views are of the minority but their job is to make it look like the majority. People blindly follow or they have to put their own work in.


MR. BMJ said:
I actually think Mike Pompeo would be a better candidate than DeSantis. He has WAY more experience, and he is well spoken. The question now is....is Pompeo going to appease the RINO's for votes? Both he and DeSantis are using, or have got where they are now, by using Trump's agenda.
Click to expand...

I believe they are both working with him. If they think they are all together, they will come after them even harder, that's how they operate.

That's been my call for 2 years now. Another trump term then 2 for DeSantis. I honestly believe that's how it's going to go too.


MR. BMJ said:
If Mitch wasn't such a bitch, he would have supported the winners of the primaries instead of pulling funding from them....that has never ever happened before. Imagine if they had his, and all the other jerkoffs in the party, backing them, it would have made a difference, imo (funding, promotional, and unity). Would they have won them all...nope. However, it would have helped.
Click to expand...

Ya, big bullshit there. What happened was he pulled funding from the trump picks. Trump won over 200 of his picks and lost about 20.

Mitch is as deep state as Biden, Harris and peloci. There are no parties in this war, it's deep state or not.


MR. BMJ said:
Trump has the largest base in the party. You don't ask the largest base to leave without beating them. These politicians stating Trump should leave, who are in the minority of the party, they are either saying this because they want to make a 2024 run for president, or they just have a personal vendetta against Trump. It's laughable for them to insinuate the beef of the party to just pack it up, lol. How about you beat him and become the majority first, before making such hysterical statements. If you beat him, then it's upon Trump to then be the bigger man and accept the loss and back the majority. If he doesn't then at that point hit him with negativity.
Click to expand...

The Republicans wanting him to leave are helping put on the propaganda show for fake news and the ones that watch it. When they put trump against DeSantis, it showed who was really still for trump and an America first agenda.


MR. BMJ said:
The day that Trump is beat, whoever is the majority from that point on, starting that day, they are going to be bombarded by the fake MSM, and they will receive fake allegations against them, just like they did to DJT, it doesn't matter who it is.
Click to expand...

Lol, they hated DeSantis and talked shit up to the midterms. Then when they pit him against trump, they were all for him.

They would do the same shit to DeSantis if trump was out of the picture, ruin him.


MR. BMJ said:
In 2024, it's Trump for me, but if DeSantis can beat him in the primaries, I will back him, or whoever it is....unless they are RINO's....at which point, that is where it will cross the line for me, and i'll just not care to vote.

However, like I mentioned on my other goofy thread...if the voting system isn't corrected, Hillary Clinton will win 2024. If John braindead Fetterman and Biden can win hiding in their basements, then she can do the same. She has the FBI in her pockets, and her staff are all over these elections learning them inside-out seeing how Biden et al have won. It's been mentioned already numerous times on the news stations, she just hasn't confessed it yet. States will just hold up and keep adding votes until she wins in these battleground states (Penn, Ga, Wisconsin, Michigan, Arizona, Nevada, etc).
Click to expand...

Honestly man, if they don't fix the elections, Biden could easily win again. It doesn't matter who is running on either side

Restart said:
People are dying. He signed off on this with Fauci/ Birks, funded Bill Gate's Gavi... What you're saying maybe true on how he's supposed to pretend to be. I know you know this wasn't good. Under Trump everything was shut down, unless he was just sitting there like Biden. Then they used the Coof for the mail in ballots.
Click to expand...

You'll have to show me what he signed because I'm unaware of anything like that. It's not even legal.

POTUS has no powers to shut down any states. It's up to each individual state.

DeSantis shut down for one month to assess. After that restrictions started lifting.

Blue states followed the globalists agenda of taking power over us. It also helped to crash the economy for the great reset. They put small business under, didn't allow people to work and started fighting over how much stimulus to give out. The more given, the faster the dollar will crash.

HardManifest said:
even though George Carlin was before my time.... I still re-watch his sketches.
Click to expand...

This is a good one, I ran across it today looking through some old stuff.

This video is a must watch if you wish to open your third eye. George Carlin was a renowned American comedian and social critic who believed in calling... | By Michael Amushelelo | Facebook

5.7M views, 127K likes, 23K loves, 10K comments, 282K shares, Facebook Watch Videos from Michael Amushelelo: This video is a must watch if you wish to open your third eye. George Carlin was a...

the puppets on the screens are ran by the same players on both sides.

testboner said:
Please God, NO ONE for President 2024.
Click to expand...

As Richard Pryor said in Brewster's Millions. I'm voting for NONE OF THE ABOVE. 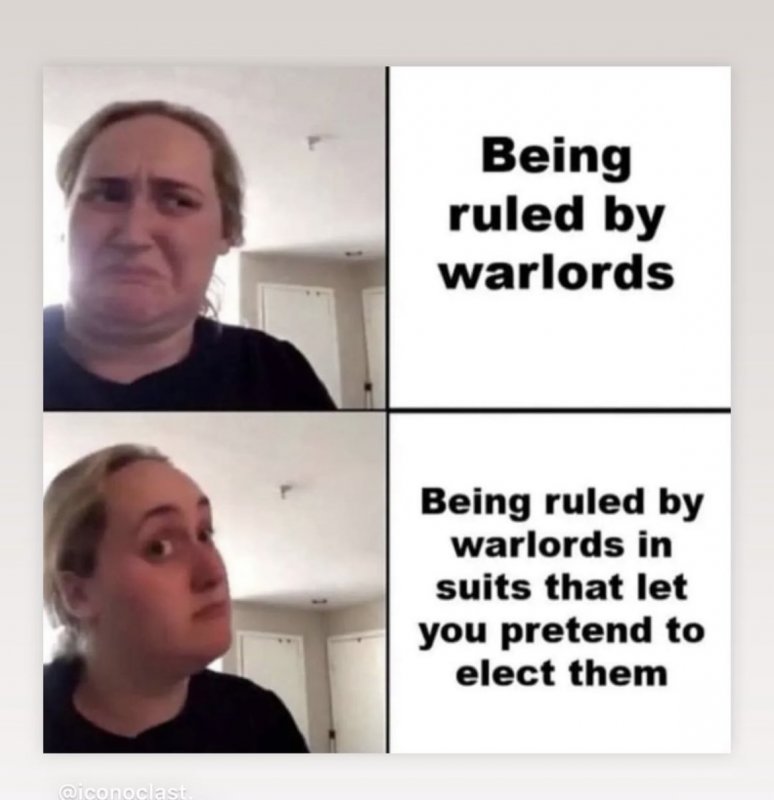 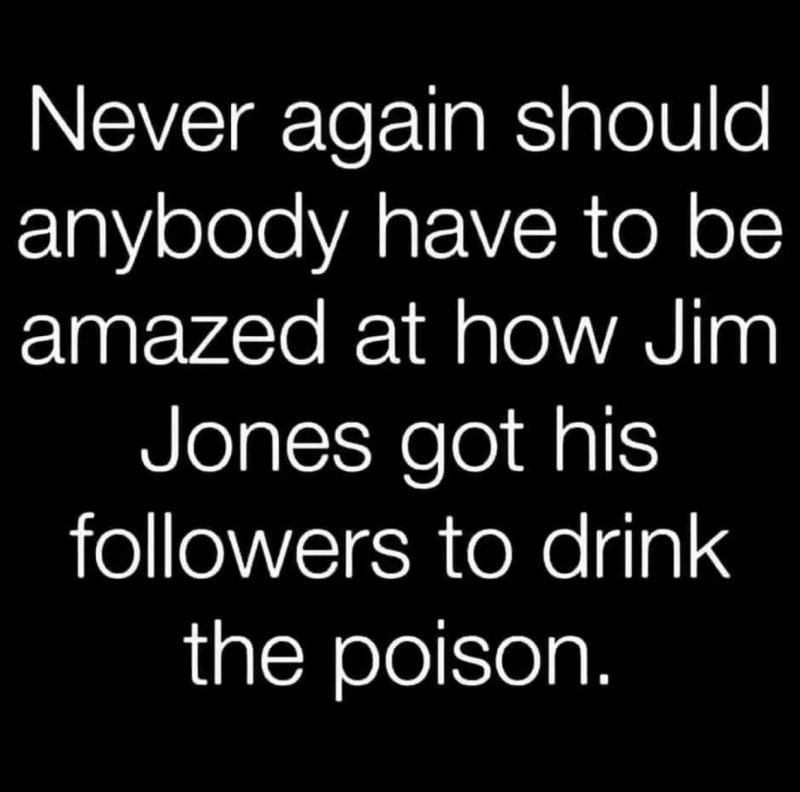 i agree they are luciferians to the max. they do very queer acts. bobby gates calls his digital cert for the masses luciferase or something like that.
Who is viewing this thread?