The XFL is coming in February 2020

Bigtex said:
Sick of the showboating/dances/taunting ( the look at me attitudes),sick of he political statements made by players and the NFL. Sick of all the rule changes protecting the quarterback causing the whole game to suffer. I was a football coach for 25 years of my life and have not watched the NFL now for the 4th year. It has become a collection of over paid crybabies. College and high school sports are much better.
Click to expand...
I'm with ya but as DYS said, it's better then no football. Some dude recovers a fumble on D without advancing it and the entire team needs to run into the end zone for a photo opp? Wideouts make a 5 yd reception for a 3 down conversion and they feel the need to help out the ref with a first down motion. How about every time they do their job they need to be thumbing to their name plate on their back? Then there's the no catch motion that's done by cornerbacks when the wide receiver just drops the ball on their own. And the one that sets me off the most; Zeke getting 10 yards behind an offensive line that should be blowing the NY Giants into the stands and he needs to do the Feed Me thing.

Bigtex said:
The NFL is way too much with enforcing rules. Let the guys play football. We also don't have the cry babies like the NFL has. Nor do we allow all of this silly end zone dancing and celebrating. We have a penalty for silly look at me stuff like this. I would have been fired on the spot here in Houston had I allowed a kid to take a knee during the National Anthem too. We even still have a team prayer in the locker room before the game. But the kneeling is what did it for me. I served in the military along with everyone on both sides of my family so that kind of behavior is a no go for me. The NFL could have stopped that but they chose not to. But that goes back to this attitude many have in the NFL that they are bigger than the sport or the team. Not the concept we teach. I think the NFL needs to pull their heads out of their asses and get back to playing football, entertaining and not allow any more political statement during game time. I know Vince McMan will not stand for that kind of disrespect.

We have kids that play because the love the sport. When I played HS football, very few guys were over 200lbs. Now almost ever O-lineman is around 300lbs. Its not unusual to see skill kids running 4.3 to 4.2 40's. Amazing to see that kind of talent at such a young age.

I have no problem with the off field behavior in the NFL. These people are not role models they are athletes and most come from some pretty bad situations. The public puts them on pedestals. I have had to go get so many kids out of jail just so they could be at practice. We are the only hope of keeping most of them out of prison.

Anyway, I coached O-line most of my career, coached a few years of D-line and some linebacker. I coached D-I AA for a period of time and then moved to high school where the pay was better. I spent the majority of my coaching years here in the Houston area. I was also usually the team off-season strength coach. I have run old school offense and defenses and the spread stuff. Most here do noting but spread offense with zone blocking. Defenses are usually a 4-3 but I have run some 4-2 and 3-5.
Click to expand...
Sounds like a hell of a coaching career. Only in Texas is the pay better in HS then 1AA haha.

Everything is spread now. I see 9 yr old teams running spread offense, and people wonder why there's no fundamentals anymore. I tell my kids all the time - if you're a good tackler, you can play as long as you want. It's a lost art. I see HS QBs who can't take a snap under center. It's a speed game now.

Anyways - I bolded what you said because that's exactly why the rules changes have happened. If they still played like it was the '80s - there'd be a lot more Darryl Stingley's out there, and football would be gone.
T

Bigtex said:
..... But the kneeling is what did it for me. I served in the military along with everyone on both sides of my family so that kind of behavior is a no go for me.
Click to expand...
I pick up a shirt that had this on it during a vacation shortly after the kneeling indecent. I have not served in the military nor has any of my family but my father had taught us about freedom, how we got it and how we keep it.

DieYoungStrong said:
Sounds like a hell of a coaching career. Only in Texas is the pay better in HS then 1AA haha.

Everything is spread now. I see 9 yr old teams running spread offense, and people wonder why there's no fundamentals anymore. I tell my kids all the time - if you're a good tackler, you can play as long as you want. It's a lost art. I see HS QBs who can't take a snap under center. It's a speed game now.

Anyways - I bolded what you said because that's exactly why the rules changes have happened. If they still played like it was the '80s - there'd be a lot more Darryl Stingley's out there, and football would be gone.
Click to expand...
When I started we taught the O-line how to count base. They knew then who their assignment was under any defense, Now just call right of left. I have to admit, zone blocking in the spread is much simpler. We have a team here called Katy Tigers. They run, inside zone, outside zone, 1-2 other run plays and a few passes. The same plays out or hundreds of formations. The love running the ball right up the middle for the 1st half. Their entire o-line is around 300lbs. So the beat the d-line down for the 1st half and then pass the ball the 2nd half. They have been State Champions 6 times since 1997.

All this concussion stuff and the world of boxing/mma is doing fine. To me, athletes know the risks. Don't get involved if you are not willing to take the chance. How many get killed drag racing........yet they still do it. Make the game as safe as you can and let the chips fall where they may.

DieYoungStrong said:
Sounds like a hell of a coaching career. Only in Texas is the pay better in HS then 1AA haha.
Click to expand...
I left D-I AA a year after completing my grad work. I stayed on a year as restricted earning coach. I could not even afford the campus housing the pay was so bad. I needed money. The head coach when I was D-I AA was making $80K/yr. Ju-co coaches work for free only the head coach gets a pay check. D-I make a killing. Most of the head high coaches in the area make over $100K/yr and don't have to teach classes, the pressure to win is as bad as college but no recruiting. I made close to what a head coach makes because of years in the business and having to teach and being head strength and conditioning coach/powerlifting. All the hours finally got to me. 12 hours a day 7 days a week never getting any time off, driving buses all over the area I did not know my wife and missed my kid grow up. When I hit retirement age I was very happy to hang it up. Never looked back.

I'm mildly excited about the XFL... We'll see if it lasts a whole season and how well the TV ratings do. I hope it's a good product and that there is some decent fan support in the stands.

McMan has been determined to make xfl happen for years now...when ya got the cheese you might as well push your passions!​

I still have my grey XFL sweatshirt lol however I can’t imagine this being entertaining. The NFL has the money and top athletes, I do catch few Canadian games on ESPN but seriously

Lizard King said:
Let's see if it lasts this time. Don't recall why it imploded last time.
Click to expand...
It imploded last time because it was an all around bad product... bad football, bad announcers, bad production, bad everything. Let's hope things change this time, but I sincerely doubt that they will.

Great game. I thought it was as good as anything I have seen in the NFL. The production of this game was 1st class. From the time we walked in the gate to the time we left. People greeting us, helping us to our seats and thanking us for coming as we left. Great fan interaction by the announcers and video crews. The University of Houston TDECU Stadium seats 40,000+. The upper sections were not open, only the lower sections. They were absolutely packed. Houston won 37-17. The fans were very loud and everyone had a great time!

Getting to the stadium was a disaster....we live maybe 30 minutes and it took a hour and a half. Two major interstates shut down for construction. Welcome to Houston.

Anyway, the whole thing was televised on Fox. Also show beautifully on the jumbo trons in the stadium. The National Anthem was played/sung at the beginning of the game and not one player or fan took a knee.

We are considering getting season tickets now. 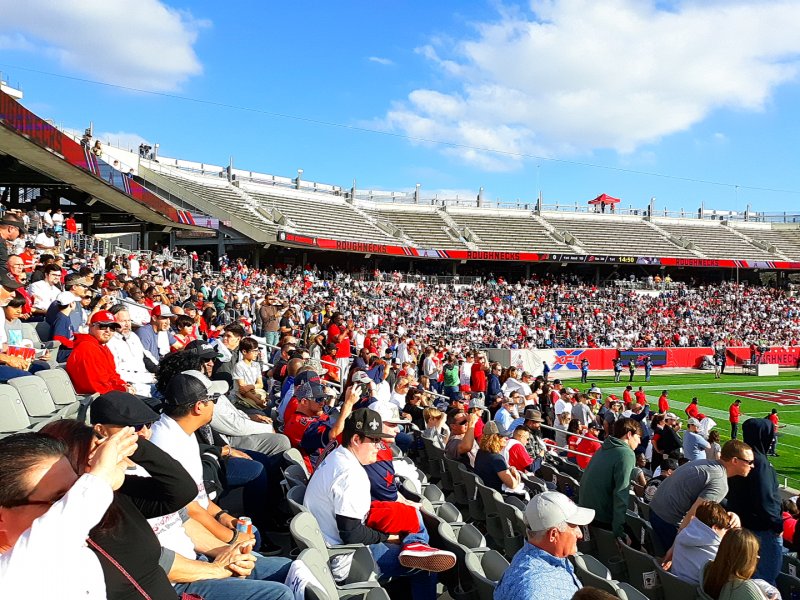 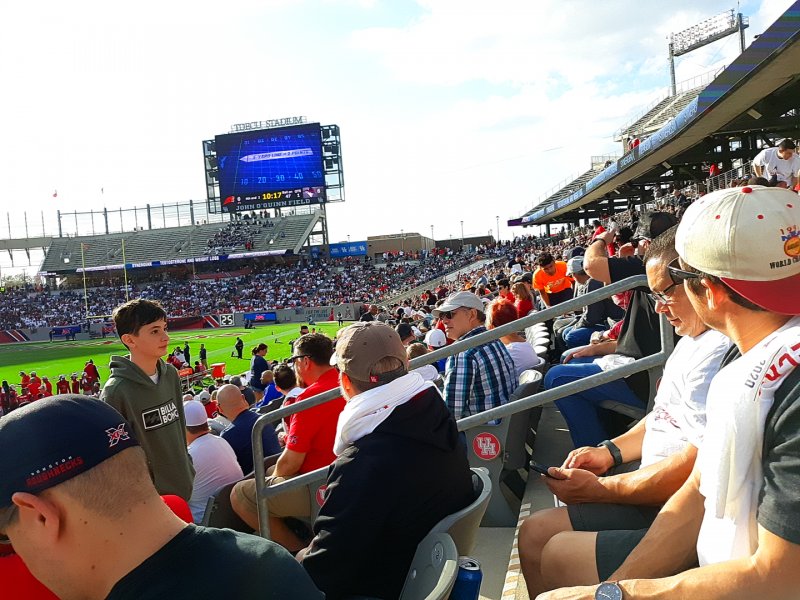 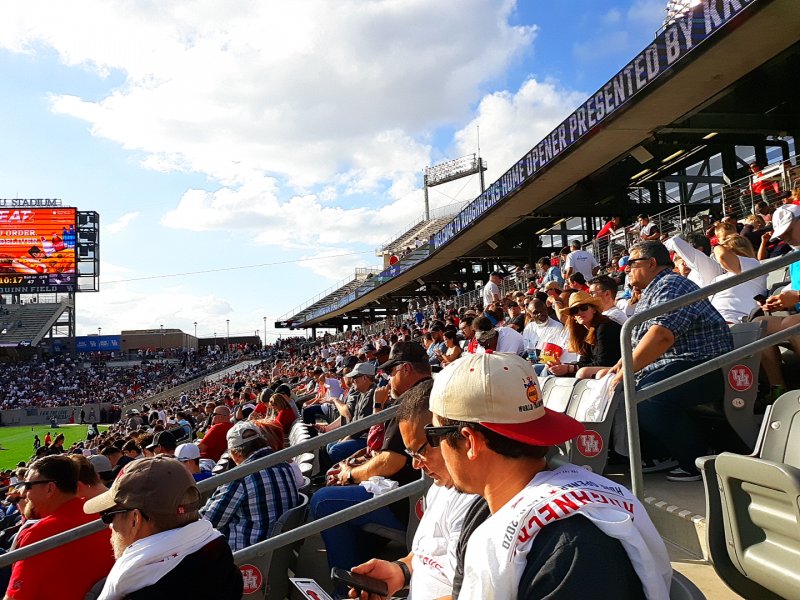 I watched the end of the game, not much different than an NFL game, will watch again.

Not terribly impressed so far, seems a bit disorganized but first week so give them the benefit of the doubt. I'm disappointed we don't have a local squad. And I see an awful lot of ladies on the field yet no cheerleaders.
You must log in or register to reply here.
Share: Facebook Twitter Google+ Reddit Pinterest Tumblr WhatsApp Email Link
Top