I bought my stepson this EliteFTS SS Yoke Bar for his birthday, which is in February.

It wasn't even supposed to ship until January but it showed up yesterday, so there it is.

He won't be home until Monday so I took the liberty of unboxing it and moving it downstairs to our weight room.

It's a really nice and solid piece of equipment.

That's a DAMN good bar. Quality piece of equipment. You'll both LOVE it.

This is my next addition. Gonna find one of the ProMaxima dual function convertible leg press/hack squat. 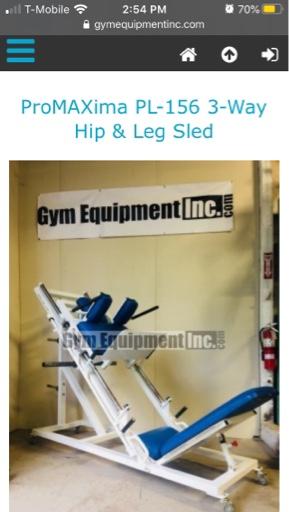 That's been my experience. I began COVID with a short shopping list of things I needed, and the more I window shopped online, the more things I saw that I kinda sorta oughtta have. For me at least, Rogue has been the most seductive site, but there are ones out there that don't seem too bad but do seem to offer quality ... but usually a shorter menu.

Gonna buy a box squat box? If you wanna spend the dollars it's a good investment. You could go the DIY route too.

BrotherIron said:
Gonna buy a box squat box? If you wanna spend the dollars it's a good investment. You could go the DIY route too.
Click to expand...

Money really is not a big issue for me. Biggest deciding factor is space. All my gear is in a 10' x 14' room and I already have 7 bars, 2 squats stands, 3 benches and a weight tree.

Jealous of your son. I’ve been lusting after those for years.
S

The gym I go to has one. Ive been using it for squats. Def takes the strain off your shoulders. You really have to focus on not pushing up on the handles or you will strain your shoulders and the balance will be off. So much better when you relax your grip and let the bar balance itself.
S

Squat max md is the only

monsoon said:
Jealous of your son. I’ve been lusting after those for years.
Click to expand...

Titan has a gersion 2 of this bar. Its made by the same company in Minnesota that makes elites bar. Biggest change is the sleeves are standard size to accept collars, the elite doesnt accept standard collars due to a smaller diameter sleeve. At a fraction of the cost. I have one and lovee it. Suspend some kettlebells from bands and do some walks with it.... awesome.

You mean, your son needs one for HIS new bar, lol
Who is viewing this thread?