I must be mis-informed?

So watching the news tonight where my nice hot Jewish chick is now replace by an African American woman. There was a BLM protest around a Columbus statue that was not yet taken down. Not sure how the killing of a guy in Minnesota translates to ripping down all the Columbus statues around the country, but I digress. Anyway, the guy on the news with his nice freshly pressed BLM shirt, Hillary couldn't have ironed it better herself said, we want this statue ripped down for the oppression of us indigenous peoples.

I'm sorry, did I miss a history lesson where African Americans were Indigenous to America?

Did I miss where Columbus took a million African slaved to America?

Was Columbus a Saint, hells no. Did he do something to be remembered for, hells yes.

People need to stand up for something, anything, shit's getting crazy. Terrorist ripped down a status or Grant in San Fran. GRANT!!! He won the fucking Civil War you fucking idiots!!!!

I have a statue of Katelyn Ohashi next to my bed, and I do things to it every night

Dude, I lost track of the shit.

There is a big list, these are off the top of my head.

They burned an elk statue (huh?)

They found out Obama's family owned slaves but they aren't saying anything about that shit.

I'm with you LK. If there's anything I've learned over the past few months is that "group think" is "no think."
There a small group of people who want to burn this country to the ground, and the dems think they can use those radicals as their useful idiots they need to win the next election. I don't think the dems are thinking this through. The dems are creating a monster that they cannot control. The radicals will line the dems up against the wall just like they will the GOP.

History will repeat itself.

LK I’m with you and don’t understand what the purpose is vandalizing everything.

And we all know from items we’ve used in our past that we’ve all had rage build up inside us and have destroyed some landscaping, maybe a table or 2.

I guess the point is, regardless, sometimes it feels good to destroy some shit.

However with that said, why the hell are you gonna destroy the statues of Some of the people that helped to end what happened in history.

And our ancestors fought their butts off to give us the right to stand up for what we feel is right and freedom of speech and we all need to be thankful for that, but let’s not destroy our home or what others have worked hard to build.

This was graffiti at Berkeley. The liberals need to remember their history. Lots of liberals were executed by Lenin, Stalin, Mao, Castro, Che, Pol Pot, etc. It never ends well. 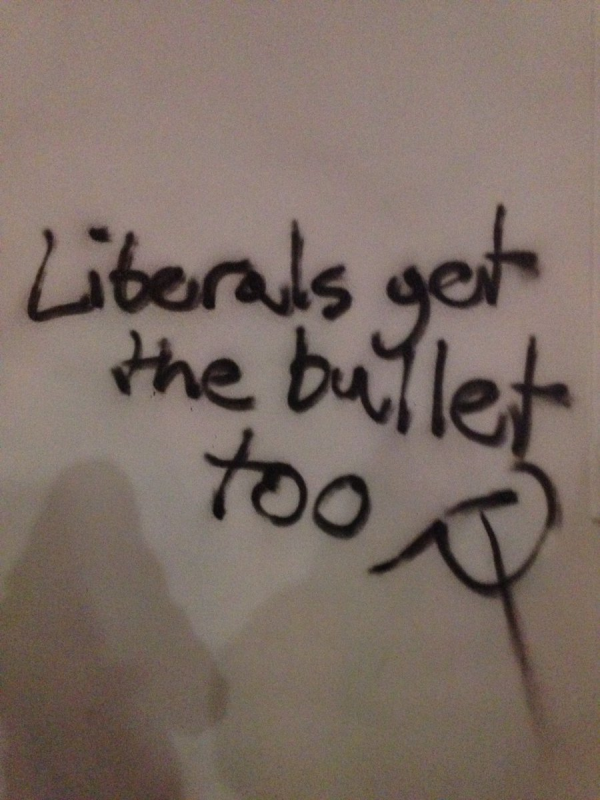 I’m just gonna close my eyes and shake my head

And to think we (used to) venerate Christopher Columbus because John Cabot, who had more to do with our existence as a country, did it in the name of England, which we didn't originally care for all that much. Does anyone teach the fact that Columbus was imprisoned in Spain for punishing crew members who were raping and killing native Americans?

blm is a hate group founded be that nazi fuk soros..These 20 year old idiots from blm and antifa need to be stopped with pure violence

Bro Bundy said:
blm is a hate group founded be that nazi fuk soros..These 20 year old idiots from blm and antifa need to be stopped with pure violence
Click to expand...
Start hate fucking some of the chicks after you shave their armpits.
C