The guy that broke them out got 6 reps with the 200lb.
I couldn’t quite close it. Giving her all I had in
grip power it still had maybe an 1/8 gap.
I could see how they would help for sure.

Snake still has adidas pants from 85

Ok since 1980, they came out with some different strengths. I'm not sure what lbs those old ones were so can someone recommend a poundage? I was doing 80 reps with those and I'd rather do half those reps or less.

I always have one in or on my desk. Never broke one though but have lost several thru the years. My son just gave me a new one on my bd. It's adjustable 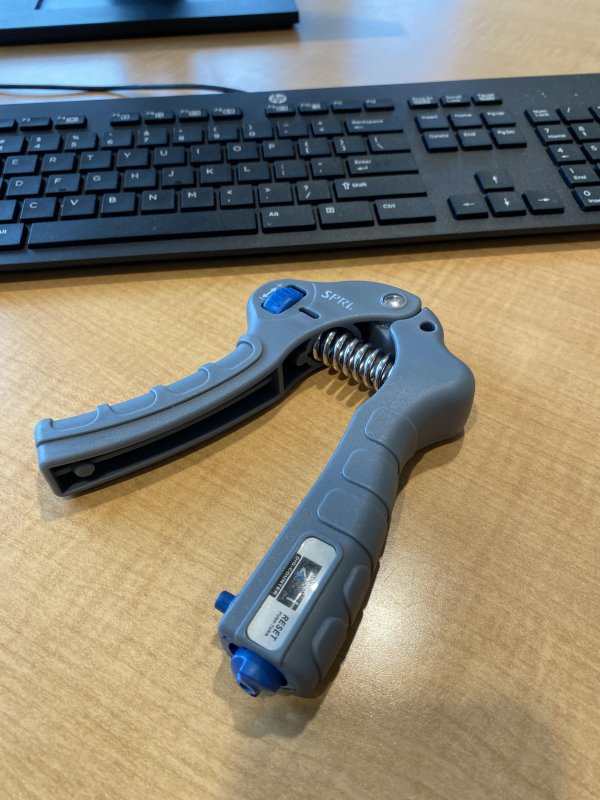 midevil said:
I always have one in or on my desk. Never broke one though but have lost several thru the years. My son just gave me a new one on my bd. It's adjustable

Any idea what poundage it goes up too?

The other Snake said:
Any idea what poundage it goes up too?
Click to expand...

Just looked it up only goes to 80. Lots of reps but works...https://www.dickssportinggoods.com/...U6UVByFRRlYmsfer6ERoCWksQAvD_BwE&gclsrc=aw.ds

This one goes to 90lbs

The other Snake said:
Any idea what poundage it goes up too?
Click to expand...

Don't know the numbers, but do know (of) THE authority you may get an answer from.

Richard Sorin, who is probably ~68-70yo by now, is a well known figure in strength-in-general circles ... because he founded Sorinex way back (1970s?) when selling heavy duty and innovative gym equipment was a risky career choice. His son Bert runs the company now, but Pops is still around.

Richard did not invent the Captains of Crush, but he was the first and only to close the #3's way back in the 1980s. He remained the only for yrs, although #4's have been made and closed since. ANYway ... what I remember about him is not so much about his own strength accomplishments as about his flat out LOVE of all things strength ... especially GRIP strength, and how it can be demonstrated in many ways.

I lost touch with him sometime last Century, but you may be able to reach Richard, or Bert, through their company website or other online presence. Richard, and maybe Bert, are grip strength historians. It may be the CoC grippers a few here remember are different than the old ones, but the Sorins are the most likely people* who will know.

* It may also be @BrotherIron will know, and I'd be surprised if there are no others on the Den who have used, or are familiar with, "the other Rogue."

But I look better in them!
I

We all know that working muscles so that they're roughly balanced is important to living pain free. Just like how overworked quads and underdeveloped hamstrings can exacerbate knee pain or working your core can help with back pain.

Grip and crush strength is good but working the extensors to some degree should, imo, be included as well. Not to sound like a shill but Iron Mind also has something for this called the "Expand-Your-Hand" bands. Similar to the CoC grippers, they come in a range of resistances and work the muscles opposite to the grip strength muscles. I've used em for a while and they're harder than they look.
Who is viewing this thread?